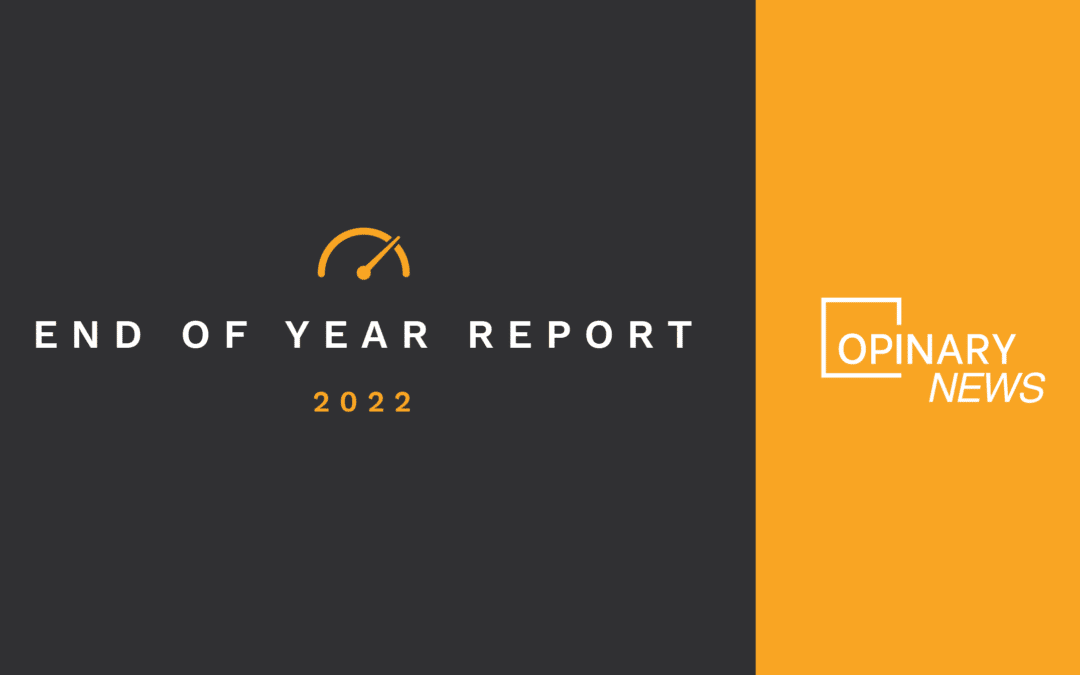 We recently dug out annual reviews from the past years, including one from 2016. One of the most frequently asked questions at the end of this historic year, in which Western democracies received a heavy blow with Brexit and Trump was whether 2016 had indeed been the worst year ever. The answer, with several tens of thousands of votes and a large cross-publisher majority, was a resounding YES! It couldn’t have been worse!

Since then, year after year, it’s been the same: it’s gotten worse. Yes, and for this year, of course, a particularly large number of tragic superlatives can be found. The topics of 2022 that had the highest coverage this year all revolve around great, unresolved awfulnesses. Most notably, of course, a war in the European neighbourhood, inflation, Trump emerging from obscurity, and a World Cup that was tragic in many ways. And yet, ranking 2022 as negative compared to previous years is as futile as thinking that next year is bound to be really good.

It will certainly be difficult. But it’s also true that during all this awfulness, an infinite number of great and beautiful things happened, too. As banal as it sounds in contrast, at Opinary it was a great year in many ways. Never before have our publishing partners gotten so much value out of our 1st party data. We finally got a scalable new advertising product on the road after a painfully long development phase and became programmatically bookable. Fantastic new team members have joined us. We are finally taking steps into global markets again after a long “internationalisation break”. There was so much valuable exchange with our partner editorial teams as rarely before. It rained prizes and awards. We expanded partnerships with more than 35 new publishing partners.

If there is that turning point in time that Olaf Scholz spoke of sometime this year, then perhaps the most important skill for this era is learning to live with its ambivalences. The terrible and wonderful happenings stack up, and you can probably only really come to terms with them if you actively perceive, allow and acknowledge the happenings from both categories. Neither looking away at beautiful, nor at terrible news, but looking – and asking.

You also do this by continuously asking your readers questions. We think that is great.
All the best,
Pia

The topics of the year from the Opinary editorial team

The war next door

The Russian invasion of Ukraine was the dominant topic this year. Every seventh Opinary survey in 2022 dealt directly with the war and its international echo. Since March 4, “Focus Online” has been asking readers about their personal sense of threat from the war. During deadlocked phases, the feeling of threat partially subsided. But the threat was in the majority throughout the year.

The limits of helpfulness

One question has divided society like no other. How far do we want to go with our aid to Ukraine? It has flared up above all over the supply of heavy weapons. It took the German government long months to agree on a decision. But the public debate is by no means over. Particularly along the contours of the former German division, opinions on the matter still diverge widely. As can be seen in the polls on Web.de.

The second biggest issue of the year is a direct consequence of the first. While the war against Ukraine stagnated, inflation in Germany spiralled at an all-time high. The bill for Germany’s dependence on Russian imports. Prices for gas, electricity, gasoline and food rose. Partly out of compulsion, partly out of greed for profit. The full force of the energy crisis is yet to unfold this winter. But the consequences have long been felt in everyday life by readers of the “Hamburger Abendblatt”, for example.

So what to do about the galloping inflation? The German government decided to trot along behind, arguing, for the time being. Then, each party in the coalition tried to score points with its own package. The result was a mixed bag of compromises. The gasoline rebate, X-to-Y euro tickets and a variety of other measures could only help to a limited extent. Nevertheless, almost everyone has to save money. This can be seen in the readership of each of our publishing partners. For some, hardship is already hitting basic needs.

Ego alone is not enough

In the U.S., someone already swept to the top once before by crisis-driven fears began to warm up this year. Donald Trump wants to make America even greater than last time. But the eagerly invoked red wave at the midterms failed to materialize. Trump’s hand-picked candidates were ultimately too radical for many voters. This will only make the upcoming presidential primaries tougher and dirtier.

At the end of a year of perpetual crisis, a bit of distraction with a cosy sporting event would have been just right. For once, not murder and corruption. Instead, there was the World Cup in Qatar. And in terms of sports? The national team lacked one thing above all. Playing good soccer. Hansi Flick was supposed to finally make everything better. The initial love for him has quickly turned into frustration. Flick has now fully followed in Jogi Löw’s footsteps.

But everything will finally be fine again at the 2024 European Championships in Germany. When Corona is over. And the war in Ukraine. And gasoline costs €1.20 again. And cannabis is legalised. And the leadership we expected from Olaf Scholz has finally arrived.

Therefore, we – the publisher team – wish you a happy new year, as well as peaceful and relaxing holidays! We thank you for the wonderful collaboration and are already looking forward to the new year with you.